Double-dipping is a “no go” in the real world of eating chips and salsa with a circle of friends but an everyday reality in the world of lobbyists and PR professionals.

Dip one: TransCanada Corporation, which SKDK does public relations work for, as revealed in an Oct. 2012 New York Times investigation. TransCanada is the multinational corporation currently building the contentious southern half of theKeystone XL (KXL) tar sands pipeline, following the dictates of a March 2012 Obama Administration Executive Order. Within months, the fate of the border-crossing Alberta to Port Arthur, TX KXL export pipeline will also likely be decided by the U.S. State Department.

Dip two: Another SKDKnickerbocker client is the Association of American Railroads (AAR), the American Petroleum Institute trade association equivalent for the freight rail industry. Even without KXL – as covered previously on DeSmogBlog – tar sands crude can be moved to targeted markets via freight rail (coupled with pipeline capacity increases of other tubes and potential barging along Lake Superior).

Dunn’s firm, in short, stands to gain from tar sands extraction with or without a KXL northern half, a classic case of double-dipping.

Dunn has maximized her White House insider access status since leaving the Administration in 2009 and starting SKDK.

“Bauer also will play that role for Obama’s new political network, Organizing for America, and the Democratic National Committee, which is administering the network,” explained a Feb. 2009 article in Politico, “Bauer’s new, unmatched legal power.”

SKDK’s Bill Knapp, described by the New York Observer‘s Ben Smith (now Editor-in-Chief of BuzzFeed) as “one of the Democratic Party’s most sought-after operatives” helped develop the media strategy and advertising” for Kerry for President 2004 that culminated with a defeat to George W. Bush, while Bauer worked as legal Counsel for Kerry’s campaign. Furthermore, Dunn served as Communications Director from 1987-1990 for then-U.S. Sen. Kerry. The Kerry-lead State Department has the final say on whether the KXL north proposal becomes a reality.

As icing on the cake, numerous TransCanada lobbyists have passed through the government-industry revolving door, entering both executive-level agencies and President Obama’s inner-circle.

Brandon Pollak, served as Deputy National Director of Grassroots Fundraising for the Kerry for President 2004 campaign. Broderick Johnson went from lobbying for TransCanada to becoming Obama’s senior campaign advisor for his 2012 race against Republican Mitt Romney.

With all of these lobbyists using their ties to the White House and State Department, it looks as if the KXL decision is already a checkmate, Dunn and done scenario.

Dunn’s firm will cash in with or without KXL due to its client relationship with AAR. Even without KXL – or for that matter even with it – massive amounts of tar sands dilbit are already transported to market by freight rail, a midstream market brought to the public’s attention after the March 2013 Canadian Pacific Rail spill of 30,000 gallons of tar sands bitumen in Minnesota. Canadian Pacific is also an AAR dues-paying member.

In its Aug. 2011 Supplemental Environmental Impact Statement (SEIS), the State Department said that rail currently has the capacity to transport over 1 million barrels of tar sands per day to market.

“Even in a situation where there was a total freeze in pipeline capacity for 20 years, it appears that there is sufficient capacity on existing rail tracks to accommodate shipping…through at least 2030,” the SEIS explained. “[S]tatistics from the Department of Transportation,…conservatively estimated that the existing cross-border rail lines from Canada to the U.S. could accommodate crude oil train shipments of over 1,000,000 bpd (barrels per day).”

As a case in point, BNSF is eager to see KXL fail, seeing it as an economic opportunity of epic proportions for its rails.

“Whatever people bring to us, we’re ready to haul [and if KXL] doesn’t happen, we’re here to haul,” Krista York-Wooley, a spokeswoman for BNSF said in a Feb. 2012 interview with Bloomberg.

Then there’s the option of barging tar sands crude to markets utilizing Lake Superior as a thoroughfare, which Calumet Specialty Products Partners is considering. Platts referred to this proposal as “the Great Lakes option for getting Canadian oil to market.”

“We’re very concerned this has flown under the public’s radar,” Peter LaFontaine of the National Wildlife Federation told Bloomberg in a May 1, 2013 story. “The public doesn’t seem to have the same sort of attention for pipeline expansions as they do for pipeline construction. But we’re talking about a lot of crude.”

Cashing in on Destructive Game of Tar Sands “Whac-A-Mole”

In a Nov. 2012 article on rail serving as an alternative midstream method to pipelines for tar sands, Grist Senior Editor Lisa Hymas described the situation as one akin to a game of “Whac-a-Mole.”

“It’s like a big game of Whac-a-Mole, except what’s at stake isn’t a cheap teddy bear at Chuck E. Cheese but the health of the planet and civilization as we know it,” she wrote.

Rather than cashing in on juvenile toys with tokens gained from winning several rounds of Whac-a-Mole, though, Dunn and SKDK are gaining real-life tokens – fat wads of cash – cashing in on this high-stakes game of tar sands Whac-a-Mole.

10 Shocking Facts on the Kochs

1. Koch Industries, which the brothers own, is one of the top ten polluters in the United States — which perhaps explains why the Kochs have given $60 million to climate denial groups between 1997 and 2010.

2. The Kochs are the oil and gas industry’s biggest donors to the congressional committee with oversight of the hazardous Keystone XL oil pipeline. They and their employees gave more than $300,000 to members of the House Energy and Commerce Committee in 2010 alone.

3. From 1998-2008, Koch-controlled foundations gave more than $196 million to organizations that favor polices that would financially enrich the two brothers. In addition, Koch Industries spent $50 million on lobbying and some $8 million in PAC contributions.

4. The Koch fortune has its origins in engineering contracts with Joseph Stalin’s Soviet Union.

5. The Kochs are suing to take over the Cato Institute, which has accused the Kochs of attempting to destroy the group’s identity as an independent, libertarian think and align it more closely with a partisan agenda.

6. A Huffington Post source who was at a three-day retreat of conservative billionaires said the Koch brothers pledged to donate $60 million to defeat President Obama in 2012 and produce pledges of $40 million more from others at the retreat.

7. Since 2000, the Kochs have collected almost $100 million in government contracts, mostly from the Department of Defense.

8. Koch Industries has an annual production capacity of 2.2 billion pounds of the carcinogen formaldehyde. The company has worked to keep it from being classified as a carcinogen even though David Koch is a prostate cancer survivor.

9. The Koch brothers’ combined fortune of roughly $50 billion is exceeded only by that of Bill Gates in the United States.

10. The Senate Select Committee on Indian Affairs accused Koch Oil of scheming to steal $31 million of crude oil from Native Americans. Although the company claimed it was accidental, a former executive in this operation said Charles Koch had known about it and had responded to the overages by saying, “I want my fair share, and that’s all of it.”

Note: Here is a full list of all universities as of August 2011 to which the Kochs donate — some of which accept strings attached to hiring decisions: 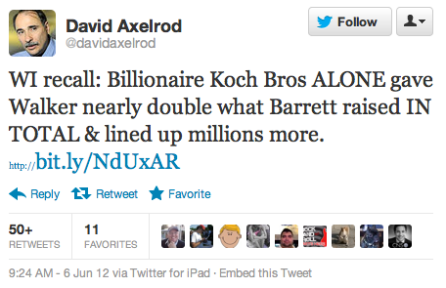 Note:  Money talks!  The Koch Brothers have billions of dollars invested in various industries, mainly dirty fossil fuels, so what better way to knock some greed out of those dirty bastards than to divest in green, renewable energy that makes sense and cents!  John E Loeffler- Fountain City, Wisconsin