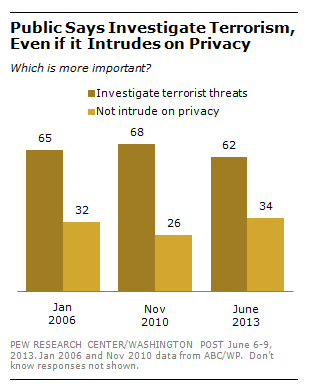 Apparently, there are still a vast majority of Americans who believe that the threat of terrorism is more important, so they are willing to give up their privacy. That plays right into the U.S. Government‘s hands! The federal government manufactures almost all of the terrorism committed on U.S. soil, usually using the FBI as their main source, and very little actual terrorism happens in America! U.S. citizens are sold on corporate-run, government-censored mass media that deceptively informs them of current events. The dumbing down of Americans is astounding in its magnitude! Wake up America, and stop believing in the constant lies flowing out of the U.S. Government including Congress! – John Loeffler, Fountain City, Wisconsin, U.S.A.