10 Shocking Facts on the Kochs

1. Koch Industries, which the brothers own, is one of the top ten polluters in the United States — which perhaps explains why the Kochs have given $60 million to climate denial groups between 1997 and 2010.

2. The Kochs are the oil and gas industry’s biggest donors to the congressional committee with oversight of the hazardous Keystone XL oil pipeline. They and their employees gave more than $300,000 to members of the House Energy and Commerce Committee in 2010 alone.

3. From 1998-2008, Koch-controlled foundations gave more than $196 million to organizations that favor polices that would financially enrich the two brothers. In addition, Koch Industries spent $50 million on lobbying and some $8 million in PAC contributions.

4. The Koch fortune has its origins in engineering contracts with Joseph Stalin’s Soviet Union.

5. The Kochs are suing to take over the Cato Institute, which has accused the Kochs of attempting to destroy the group’s identity as an independent, libertarian think and align it more closely with a partisan agenda.

6. A Huffington Post source who was at a three-day retreat of conservative billionaires said the Koch brothers pledged to donate $60 million to defeat President Obama in 2012 and produce pledges of $40 million more from others at the retreat.

7. Since 2000, the Kochs have collected almost $100 million in government contracts, mostly from the Department of Defense.

8. Koch Industries has an annual production capacity of 2.2 billion pounds of the carcinogen formaldehyde. The company has worked to keep it from being classified as a carcinogen even though David Koch is a prostate cancer survivor.

9. The Koch brothers’ combined fortune of roughly $50 billion is exceeded only by that of Bill Gates in the United States.

10. The Senate Select Committee on Indian Affairs accused Koch Oil of scheming to steal $31 million of crude oil from Native Americans. Although the company claimed it was accidental, a former executive in this operation said Charles Koch had known about it and had responded to the overages by saying, “I want my fair share, and that’s all of it.” 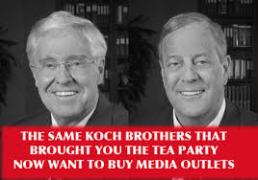 Note: Here is a full list of all universities as of August 2011 to which the Kochs donate — some of which accept strings attached to hiring decisions:

Note:  Money talks!  The Koch Brothers have billions of dollars invested in various industries, mainly dirty fossil fuels, so what better way to knock some greed out of those dirty bastards than to divest in green, renewable energy that makes sense and cents!  John E Loeffler- Fountain City, Wisconsin

Note:  This article was written in 2010.  Imagine all of the damage the Koch Brothers have done since then!

The Tea Party movement is remarkable in two respects. It is one of the biggest exercises in false consciousness the world has seen – and the biggest Astroturf operation in history. These accomplishments are closely related.

An Astroturf campaign is a fake grassroots movement: it purports to be a spontaneous uprising of concerned citizens, but in reality it is founded and funded by elite interests. Some Astroturf campaigns have no grassroots component at all. Others catalyze and direct real mobilizations. The Tea Party belongs in the second category. It is mostly composed of passionate, well-meaning people who think they are fighting elite power, unaware that they have been organized by the very interests they believe they are confronting. We now have powerful evidence that the movement was established and has been guided with the help of money from billionaires and big business. Much of this money, as well as much of the strategy and staffing, were provided by two brothers who run what they call “the biggest company you’ve never heard of”.

Charles and David Koch own 84% of Koch Industries, the second-largest private company in the United States. It runs oil refineries, coal suppliers, chemical plants and logging firms, and turns over roughly $100bn a year; the brothers are each worth $21bn. The company has had to pay tens of millions of dollars in fines and settlements for oil and chemical spills and other industrial accidents. The Kochs want to pay less tax, keep more profits and be restrained by less regulation. Their challenge has been to persuade the people harmed by this agenda that it’s good for them.

In July 2010, David Koch told New York magazine: “I’ve never been to a Tea Party event. No one representing the Tea Party has ever even approached me.” But a fascinating new film – (Astro)Turf Wars, by Taki Oldham – tells a fuller story. Oldham infiltrated some of the movement’s key organising events, including the 2009 Defending the American Dream summit, convened by a group called Americans for Prosperity (AFP). The film shows David Koch addressing the summit. “Five years ago,” he explains, “my brother Charles and I provided the funds to start Americans for Prosperity. It’s beyond my wildest dreams how AFP has grown into this enormous organization.”

A convener tells the crowd how AFP mobilized opposition to Barack Obama’s healthcare reforms. “We hit the button and we started doing the Twittering and Facebook and the phonecalls and the emails, and you turned up!” Then a series of AFP organizers tell Mr. Koch how they have set up dozens of Tea Party events in their home states. He nods and beams from the podium like a chief executive receiving rosy reports from his regional sales directors. Afterwards, the delegates crowd into AFP workshops, where they are told how to run further Tea Party events.

Americans for Prosperity is one of several groups set up by the Kochs to promote their politics. We know their foundations have given it at least $5m, but few such records are in the public domain and the total could be much higher. It has toured the country organizing rallies against healthcare reform and the Democrats’ attempts to tackle climate change. It provided the key organizing tools that set the Tea Party running.

The movement began when CNBC’s Rick Santelli called from the floor of the Chicago Mercantile Exchange for a bankers’ revolt against the undeserving poor. (He proposed that the traders should hold a tea party to dump derivative securities in Lake Michigan to prevent Obama’s plan to “subsidise the losers”: by which he meant people whose mortgages had fallen into arrears.) On the same day, Americans for Prosperity set up a Tea Party Facebook page and started organizing Tea Party events.

Oldham’s film shows how AFP crafted the movement’s messages and drafted its talking points. The New Yorker magazine, in the course of a remarkable exposure of the Koch brothers’ funding networks, interviewed some of their former consultants. “The Koch brothers gave the money that founded [the Tea Party],” one of them explained. “It’s like they put the seeds in the ground. Then the rainstorm comes, and the frogs come out of the mud – and they’re our candidates!” Another observed that the Kochs are smart. “This rightwing, redneck stuff works for them. They see this as a way to get things done without getting dirty themselves.”

AFP is one of several groups established by the Koch brothers. They set up the Cato Institute, the first free-market thinktank in the United States. They also founded the Mercatus Center at George Mason University, which now fills the role once played by the economics department at Chicago University as the originator of extreme neoliberal ideas. Fourteen of the 23 regulations that George W Bush put on his hitlist were, according to the Wall Street Journal, first suggested by academics working at the Mercatus Center.

The Kochs have lavished money on more than 30 other advocacy groups, including the Heritage Foundation, the Manhattan Institute, the George C Marshall Institute, the Reason Foundation and the American Enterprise Institute. These bodies have been instrumental in turning politicians away from environmental laws, social spending, taxing the rich and distributing wealth. They have shaped the widespread demand for small government. The Kochs ensure that their money works for them. “If we’re going to give a lot of money,” David Koch explained to a libertarian journalist, “we’ll make darn sure they spend it in a way that goes along with our intent. And if they make a wrong turn and start doing things we don’t agree with, we withdraw funding.”

Most of these bodies call themselves “free-market thinktanks”, but their trick – as (Astro)Turf Wars points out – is to conflate crony capitalism with free enterprise, and free enterprise with personal liberty. Between them they have constructed the philosophy that informs the Tea Party movement: its members mobilize for freedom, unaware that the freedom they demand is freedom for corporations to trample them into the dirt. The thinktanks that the Kochs have funded devise the game and the rules by which it is played; Americans for Prosperity coaches and motivates the team.

Astroturfing is now taking off in the United Kingdom. Earlier this month Spinwatch showed how a fake grassroots group set up by health insurers helped shape the Tories’ NHS reforms. Billionaires and corporations are capturing the political process everywhere; anyone with an interest in democracy should be thinking about how to resist them. Nothing is real any more. Nothing is as it seems. 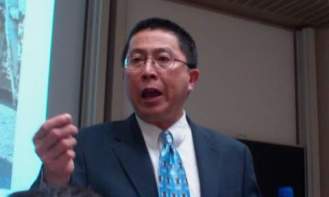 Rarely do we meet those who have made careers selling us lies. Consider the oddball doctors who took tobacco money to deny a link between cigarette smoking and cancer, or the handful of scientists who take oil and coal money to discredit global warming science, or the people who have done both.

Last week, students in Wisconsin and Michigan stepped up to such an opportunity when CFACT Campus, the student arm of a well-known cabal of fossil fuel apologists, hosted climate change denier Willie Soon at several campus events around the country.

Dr. Willie Soon is a Smithsonian Institution astrophysicist paid by Charles Koch, ExxonMobil, the American Petroleum Institute and coal utility Southern Company to write papers dismissing climate change, publish op-eds saying coal pollution won’t affect our health, refute the seriousness of ocean acidification, and apparently anything else he can be paid to deny. Dr. Soon has misrepresented himself by repeatedly claiming affiliation with Harvard University and using his credentials as an astrophysicist to make people believe he’s a climate expert, and he shows no sign of stopping. Indeed, he told students in Madison, “I am as as qualified as anyone on the planet on this topic.”