I regret to inform you that late Tuesday night, March 26, 2013, President Barack Obama, signed bill H.R. 933 into law which had the biotech rider known as the “Monsanto Protection Act” in it.  Now, the citizens of the United States have NO protection from the evils of Monsanto’s poisonous GM seeds!

Our highest elected official not only ignored the will of over 90% of Americans, but he systemically and systematically continued to strip away the rights afforded to citizens under the U.S. Constitution and Bill of Rights!  Obama just handed Monsanto a very early Christmas present by allowing them to completely overstep our federal courts, and continue to plant their toxic seeds.  Now, nothing stands in the way of Monsanto’s goal of global monopolization of the food supply!  There could not have been a worse outcome for the U.S. at a time of extreme idealism and rampant corruption never seen in the history of the world!  Hundreds of thousands of phone calls to the president on Monday, March 25, 2013 appeared to do nothing to convince Obama to at least strike Section 735 containing the “Monsanto Protection Act” from H.R. 933 by sending it back to congress for removal.

By the way, H.R. 933 is a defense SPENDING bill of almost $1 trillion for fiscal year ending September 30, 2013 during a time of Sequestration!  Don’t worry though, because President Obama will take more from the middle class and poor to pay for an already over-bloated defense budget!  This will just make even more Americans dependent on the U.S. Government, and that is exactly what happens during a switch to socialism in a plutocracy not a democracy.  Soon enough, the rights of the American people will be more eroded than a communist nation as the New World Order comes to power! 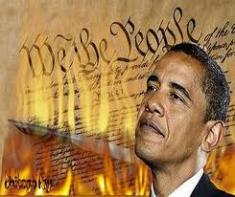 It is time to let your president know that what he signed into law is completely unacceptable, immoral and unethical!  Do you want to eat genetically modified food that is slowly killing you?  That’s exactly what it is doing!  Our government likes to think of it as population control.  Do you want your kids and your grandkids eating toxins that will bring about a slow and painful death?  Call or write President Obama today to let him know that he needs to listen to the will of the citizens of the United States of America, and he must stop acting upon corporate interests and greed over a country on the verge of total economic collapse!

*NOTE*  Check my archives for more information on our government’s love affair with Monsanto!