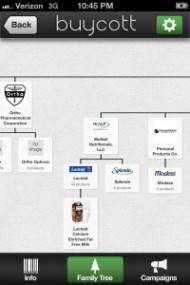 Buycott shows you a product’s corporate family tree while you shop!

In her keynote speech at last year’s annual Netroots Nation gathering, Darcy Burner pitched a seemingly simple idea to the thousands of bloggers and web developers in the audience. The former Microsoft programmer and congressional candidate proposed a smartphone app allowing shoppers to swipe barcodes to check whether conservative billionaire industrialists Charles and David Koch were behind a product on the shelves.

At the time, Burner created a mock interface for her app, but that’s as far as she got. She was waiting to find the right team to build out the back end, which could be complicated given often murky corporate ownership structures.

She wasn’t aware that as she delivered her Netroots speech, a group of developers was hard at work on Buycott, an even more sophisticated version of the app she proposed.

“I remember reading Forbes’ story on the proposed app to help boycott Koch Industries and wishing that we were ready to launch our product,” said Buycott’s marketing director Maceo Martinez.

The app itself is the work of one Los Angeles-based 26-year-old freelance programmer, Ivan Pardo, who has devoted the last 16 months to Buycott. “It’s been completely bootstrapped up to this point,” he said. Martinez and another friend have pitched in to promote the app.

Pardo’s handiwork is available for download on iPhone or Android, making its debut in iTunes and Google Play in early May. You can scan the barcode on any product and the free app will trace its ownership all the way to its top corporate parent company, including conglomerates like Koch Industries.

Once you’ve scanned an item, Buycott will show you its corporate family tree on your phone screen. Scan a box of Splenda sweetener, for instance, and you’ll see its parent, McNeil Nutritionals, is a subsidiary of Johnson & Johnson.

Even more impressively, you can join user-created campaigns to boycott business practices that violate your principles rather than single companies. One of these campaigns, Demand GMO Labeling, will scan your box of cereal and tell you if it was made by one of the 36 corporations that donated more than $150,000 to oppose the mandatory labeling of genetically modified food.

Deciding to add that campaign to your Buycott app might make buying your breakfast nearly impossible, as that list includes not just headline grabbers like agricultural giant Monsanto but just about every big consumer company with a presence in the supermarket aisle: Coca-Cola, Nestle, Kraft, Heinz, Kellogg’s, Unilever and more.

Buycott is still working on adding new data to its back end and fine-tuning its information on corporate ownership structures. Most companies in the current database actually own more brands than Buycott has on record. The developers are asking shoppers to help improve their technology by inputting names of products they scan that the app doesn’t already recognize.

And if this all sounds worthy but depressing, be assured that your next trip to the supermarket needn’t be all doom and gloom. There are Buycott campaigns encouraging shoppers to support brands that have, say, openly backed LGBT rights. You can scan a bottle of Absolut vodka or a bag of Starbucks coffee beans and learn that both companies have come out for equal marriage.

“I don’t want to push any single point of view with the app,” said Pardo. “For me, it was critical to allow users to create campaigns because I don’t think it’s Buycott’s role to tell people what to buy. We simply want to provide a platform that empowers consumers to make well-informed purchasing decisions.”

Forbes reached out to Koch Industries and Monsanto for comment and will update this story with any responses.

Update: Tuesday’s traffic surge is causing some problems for Buycott. Pardo says he’s working to fix issues with the Android app in particular. “The workload is a bit overwhelming now,” he said. “For example, our Android app was just recently released and the surge of new users today has highlighted a serious bug on certain devices that needs to be fixed immediately. So all other development tasks I was working on get put on hold until I can get this bug fixed.”

Update 2: Pardo has had to temporarily remove the Android app from the store to fix glitches. He told Forbes on Wednesday: “Things are *slightly* more stable, but the app is now #10 in the App Store overall, which is pretty unbelievable. I simply didn’t set up the servers to be prepared to handle 10+ new users every second.  I was expecting a more manageable rise. I had to pull the Android app from the store because I haven’t had a second to address the issues with it and I’ll take any relief I can get right now. Will continue to try and get it in decent shape but I’ll eventually need some sleep!”