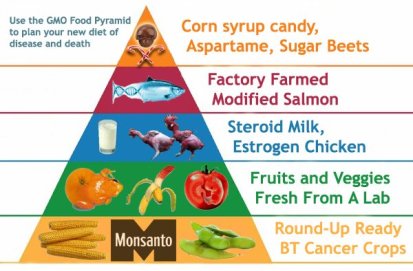 The House of Representatives hid the “Monsanto Protection Act” first in H.R. 933 that passed on March 6, 2013.  Then the Senate hid it in their revised version of H.R. 933 that  passed on March 20, 2013!  You really have to dig to find what certain legislators are purposely inputing and hiding in bills like defense spending which is NOT supposed to happen to begin with!  Due to Congress not being able to balance the nation’s budget since 2009, we entered a Sequestration.  The Dept. of Defense (DoD) was supposed to take the biggest cuts in spending, and rightfully so, since their budget is extremely bloated!  Instead, our elected leaders decided to pass a defense spending bill of almost $1 trillion for fiscal year ending September 30, 2013!  They managed to sneak Monsanto’ s biotech rider into the defense spending bill after accepting a great deal of lobbyist money from Monsanto!

Fact:  An average of $9 million in lobbying money flows from corporations and banks into D.C. every day!

Here is a link to the official senate vote on H.R. 933:  http://www.senate.gov/legislative/LIS/roll_call_lists/roll_call_vote_cfm.cfm?congress=113&session=1&vote=00044

What does the “Monsanto Protection Act” do?

“Bowing down to Monsanto’s well-funded lobbyists, Congress voted to allow Monsanto to grow GMO crops that could be harmful to human health and the environment – even if a federal court or a regulatory agency rules that the planting of those crops is illegal. Under this new law, sneaked in at the last moment as a rider to the federal appropriations bill, not even the federal courts will be able to stop Monsanto from introducing a slew of new, potentially poisonous GMO crops into our food supply.” – Organic Consumers Association
by John Loeffler – Fountain City, Wisconsin
44.131908 -91.718763

3 thoughts on “Important Information On The “Monsanto Protection Act””